-The Mayor-
Cash: 200 credits
Weapon: Repeater Rifle, Pistol
Shields: 0
Special Capabilities: Battery to Shield convertor
Description: The dictator of Barons Hed, he declared martial law after the Empire pulled out of the area. Ruling the town with his own personal body guards, he is a dangerous enemy to anyone who opposes his law. Whether in his estate, or patrolling the streets, the Mayor of Barons Hed strikes fear in the hearts of those under his rule.

-The Guard-
Cash: 50 credits (week's pay)
Weapon: Vibro Axe, Repeater Rifle, TDs, Pistol
Shields: 100
Special Capabilities: Battery to Shield Converter
Description: The police of Barons Hed, guards are a constant threat to those who are against the Mayor and his unjust laws. They serve their master with unswaying devotion...unless someone offers them a higher pay.

-The Assassin-
Cash: 1 credit
Weapon: Sniper Rifle, Pistol, Repeater Rifle
Shields: 100
Special Capabilities: Zoom Scope, Disguise
Description: The rogues of the town, the Assassins are out to stop the Mayor and his guards at all costs, bent on restoring peace and freedom to the war-torn town. They command a small group of tusken raiders who support their cause, and strike from their hidden stronghold in the canals just outside the town.

-The Civilian-
Cash: 100 credits
Weapon: Pistol
Shields: 0
Special Capabilities: None
Description: The average citizen, civilians can be found roaming the streets, selling their wares, or living quietly inside their homes. They are the undecided folk of Barons Hed, swaying neither to the side of the Assassins, nor the Mayor's personal selection of Guards. That choice, however, is one they may soon have to make.

-The Doctor-
Cash: 50 credits
Weapon: None
Shields: 50
Special Capabilities: Healing
Description: The lone Medicine man, the doctor serves the injured and dying of his town. He always carries a first aid kit which he uses to heal the victims of urban war, and also administers treatment to the sick in his small but functional hospitol.

-The Weapon Vender-
Cash: 100 credits
Weapon: Crossbow, Pistol
Shields: 0
Special Capabilities: None
Description: A famous survivor of the local Imperial resistance back in the days when the imposing white armored troops patrolled the streets, the Weapon Vender offers tales of his heroism and powerful ammunitions to anyone who happens by his shop. A favorite friend of Assassin and Guard alike, this is the man to see when you need a weapon, no questions asked.

-The Items Vender-
Cash: 100 credits
Weapon: Pistol
Shields: 100
Special Capabilities: None
Description: The Item Vender is the one to see when your shields need mending and your batteries are low. His tiny shop, located near the weapon store, is his base of operations, but his merchandise can be purchased in multiple locations.

Step 2.) Place the file called 'baronrpg.gob' in your episode directory.

Step 4.) Create a new character, and bind keys for 'drop item', 'drop weapon', 'money display', and 'doc heal'. To bind a key, go to setup, go to controls, go to keyboard, and scroll down to the bottom of the list where you can assign keys for the above mentioned functions.

Step 5.) Enter a game, and walk up to the Gran to the left of the door directly in front of you. This is Fendle, and if you activate him he will tell you a hint. He is useful if you are new to JKrpg.

Step 6.) Enter the elevator shaft and drop down until you reach the desired floor. If you reach the bottom and want to get back up, step into the red teleporter, and you will spawn in the lobby.

1.) Using drop item: Hit the hotkey you assigned during setup, and you will drop the item selected in you inventory. You can also hit the drop weapon hotkey to drop the weapon you are currently holding.

2.) Using Scope: You must have the sniper rifle. Select the scope icon in your inventory, and activate it. To use properly, make sure you are not moving, and adjust zoom by how long you hold down the activate command.

3.) Using Converter(guards and mayor only): Select the battery to shield converter icon (looks like a bulb), and activate it. Activate it again to turn it off.

4.) Using Heal(doctor only): Select the cross icon (or hit hotkey), and activate it quickly to heal yourself. Hold it down until it targets another player and release to heal them.

5.) Using Disguise(Assassin only): Select mask icon, and activate to change skins. While in this mode, you cannot draw a weapon other than fists, or your disguise will fail. Use again or draw weapon to deactivate.

6.) Purchasing Items: Touch an item and it will tell you the cost. Hit the money display hotkey to see if you have enough. If you wish to purchase the item, activate it, and if you have enough credits you will buy it. Also note that if you do not have ammo for a purchased weapon, you need to buy that too, or you cannot use the weapon.

7.) Earning Money(venders only): Activate any item in your shop (weapon vender activates weapons, item vender activates shields and items, etc). Touching the item will reveal how much money it currently holds. If someone has previously purchased it, a percentage of that cash will be added to your account.

8.) Using the Bank Machines: Touch the bank machine and it will tell you how much you have in your account (up to 1000). Activate it to insert credits into your account, and activate it two times in a row swiftly to withdraw all the credits you can carry (up to 500) from your account.

9.) Contacting Team: Activate a com unit, and a message will be displayed with your name and location to everyone on your team (guard activates, mayor and guards see message, etc).

11.) Trading with Civilians: Scattered throughout the level are civilians, all of whom you can chat with by activating them. Some of them will have tasks for you to do, or trades they would like to make. They only trade with certain character types, depending on the civilian. To trade, make sure you have the item they are requesting, and then activate them again.

1.) Tusken Raiders are located throughout the level, mainly in the canyon and tunnel. They will attack anyone who is not an assassin, and can be activated by assassins to follow them.

2.) There is a complex sewer system benieth the city which is ideal for getting from place to place without being seen above ground, or drawing too much attention.

3.) There are coins hidden throughout the level, and you can also kill other players to steal their money and inventories.

4.) The most action generally takes place around the stores and in the central marketplace.

1.) Force has been disabled, and each character has their own special skills instead.

2.) Lag is pretty heavy, so it is suggested that hosting be done on cable modems or DSL lines.

3.) While 1 on 1 games can be fun, it is suggested that you play with at least 4 people for maximum entertainment value.

4.) Slaughtering harmless civilians is not only evil, but subtracts from your score, you dirty murderer. 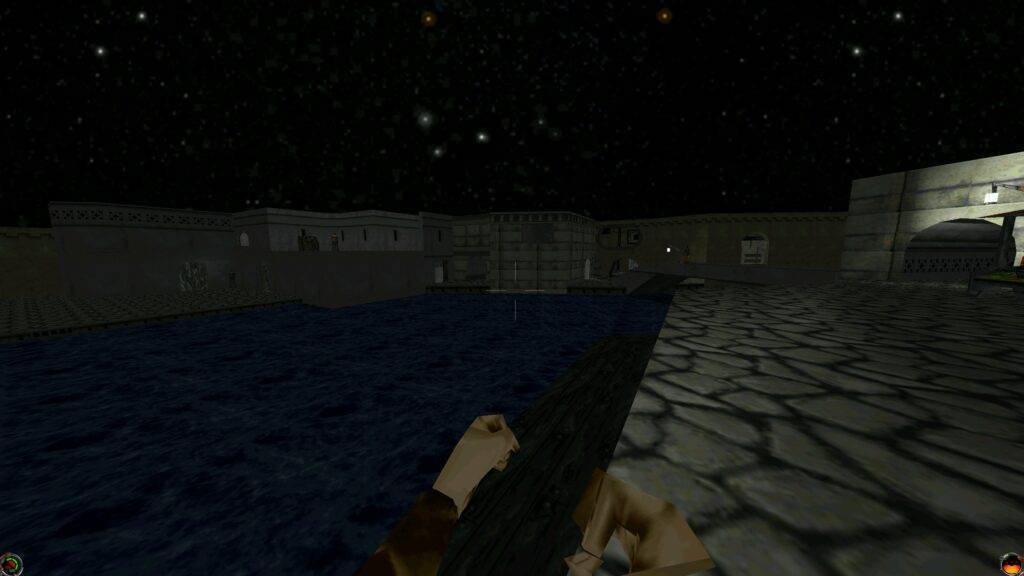